Transorbital approaches for neurosurgery have recently attracted attention and several anatomical studies have aimed to improve these techniques, but significant deficiencies in clinical practice remain, especially for aneurysm surgery. The authors present an alternative microsurgical route and the results of an analysis of patients with intracranial aneurysms who underwent a lateral transorbital approach (LTOA) using lateral orbito-zygoma-sphenotomy (LOZYGS).

The clinical and surgical results of a series of 54 consecutive patients with 1 or more aneurysms who underwent surgery via LTOA are reported. A lateral orbitotomy was performed after making a 3-cm skin incision parallel to the lateral orbital rim. A second bone flap, which included the zygoma and sphenoid bones that form the lateral orbital wall, was removed. The lesser sphenoid wing, including the anterior clinoid process, was fully drilled, except in cases of middle cerebral artery (MCA) aneurysms. Cisternal dissection was performed using the classic microsurgical technique starting from the proximal Sylvian fissure and carotid cistern. After the aneurysm was clipped following microsurgical principles, the dura mater was closed in a watertight fashion and 2-piece bone reconstruction was achieved.

Sixty aneurysms in 54 patients were clipped using the LOZYGS route. Twenty-one aneurysms were located on the MCA, 30 on the anterior communicating artery, 8 on the internal carotid artery, and 1 at the apex of the basilar artery. The unruptured-to-ruptured aneurysm ratio was 17:43. The operative field was moved to the orbit using the LTOA to avoid interference by bone and muscle tissues. Early proximal control was achieved using a short working distance and direct exposure of the base of the cerebrum, without any requirement for retraction. Because different view angles and surgical corridors were used, no segment of the aneurysm or the parent artery remained unexposed. Therefore, the introduction of additional tools was not required.

The LTOA allowed enhanced broad-perspective exposure of the operative field, early proximal control, and satisfactory surgical freedom. This alternative surgical approach safely exposed the target area and the operative field. The LOZYGS route is safe and effective for the LTOA and microsurgical clipping of anterior circulation aneurysms. According to the authors’ surgical experience and clinical experience, the LTOA can be considered an alternative surgical route to supratentorial aneurysm surgery.

Stereoscopic video recordings of operative microscopy during neuroanatomic dissections are an import ... 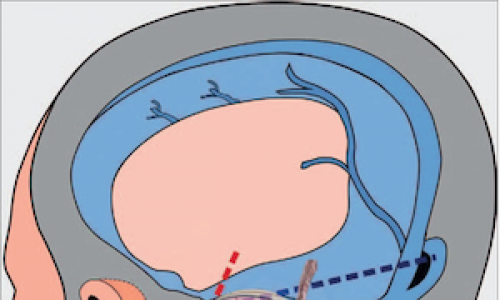 The location of burr holes in posterolateral cranial base approachesshould be appropriate to pr ...